This is the third part in my series about music theory. In the previous post, we covered musical scales, namely the Major and Natural Minor scales. In this part, we'll cover key.

Remember: You can hit the notes to play their sounds. If you're on iPhone, turn your ringer on to enable sound.

Recall that a scale is no more than a group of notes within the same octave. The notes, or degrees, in a scale are typically found by starting at the root note (often called the tonic) and moving along a sequence of whole and half steps.

An interesting phenomenon related to scales is that the notes in their degrees aren't unique to the scale. For example, here's the C Major scale.

And here's the A (Natural) Minor Scale.

And if we shift the above keyboard to the left a few keys we get...

Woah! The C Major and A Minor scales both have all notes of the white keys in their scale. Does this mean that they're identical?

In most Western music, a sequence of notes like that of a melody often move between the notes in a scale. This is very useful information, as understanding the scale with which a piece is composed helps us better understand the piece. But, as we saw above, some scales share notes. So, how do we know which scale the piece is composed in if the melody's notes fit more than one scale?

The answer is in the resolution. Take "Mary Had a Little Lamb", for example. The song's melody is as follows. 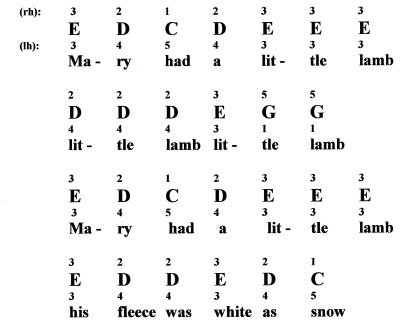 Here, you can see that the song's melody consists of a group of white notes on a piano. We saw earlier that both C Major and A Natural Minor consist of white notes. To determine which between these two is the scale of the song, we need to find out which note the melody resolves, or finishes, on.

Which sounds better? A resolution on A or C?

You probably said C, since that's what the melody actually finishes on. Because resolving on C feels much more natural than resolving on A, we can say that C is the tonic of this scale.

Starting over, we were able to determine that the song used either the C Major or A Natural Minor scale based on the group of notes used in the song. We noticed that the melody resolved on a C and not an A, though, so it must be using the C Major Scale.

With this being said, we can also say that the song is in the key of C Major. Put simply, Key = Scale + Tonic, so we can find the key by first determining which scales have the song's notes. If only one scale has them, then the key of the song is the same as that scale. If there is more than one scale, we can find the key by determining which scale's tonic note the song resolves on.

Finding the Key of a Song

Again, key is a scale plus a tonic. So, we can find the key that a song is in by first finding the scale. We need to ask ourselves what notes are being played throughout the song, then what scales consist of those notes.

In the case of "Mary Had a Little Lamb", the notes in the song are on some of the white keys of a piano. This means that two possible scales for this song are A Natural Minor and C Major, since those two have notes from all of the white keys in their scale.

Then, we need to listen to the song and determine when resolutions occur and on which note those resolutions take place. Once you've found that note, find out which one of the scales from earlier has that note as its tonic. The key of the song is named after that scale.

As we can recall from earlier, "Mary Had a Little Lamb" resolves on a C. A C is the tonic of C Major and  not A Natural Minor, so this song is in the key of C Major!

Why don't I always hear people say that the key of a song is in X Major?

When a key is in a major scale, people will typically leave out the "major" part when referring to it. So, when people say that a song is in the key of F, for example, they're saying that the key is in F Major.

Do major and minor keys have the same tonic?